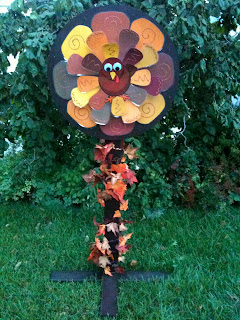 Here is another way to use the  Big Wheel Spinner I made here. I know this wheel spinner isn't something many of you will make, so I do have another option I'll tell you about later.


This is how I made this Turkey Spinner 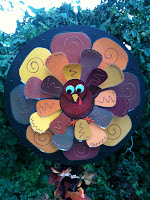 HOW TO SPIN AND SING 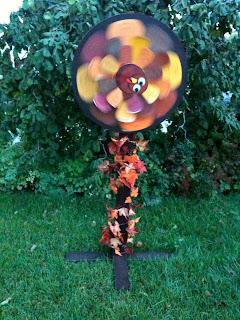 I've attached a file with a turkey body and some ovally-shaped feathers if you want to just make a turkey that you can post on a board and have the children pick feathers from to choose songs. You could leave the feathers off and scatter them on the board or around the room and have the children pick/find a feather, add it to the turkey, then sing the song. There are colored feathers if you want to print on colored card stock or a black and white one you could use to color them in yourself. Just print how many feathers you want your bird to have.

Instead of a poster, another option, if you want more of a 3-D look, is to get a bigger and fatter styrofoam disk or ball, cut in half and paint, adhere the turkey you've cut out, use smaller pieces of popsicle sticks to adhere to the bottom of the feathers and pluck the feathers out or stick them in the turkey for the songs. You may have to weigh the styrofoam down a little so it won't topple over as easily.

I'll post another way I used this with a Sing-a-Story next.