As I mentioned in my last post here, here is another option I've used in conjunction with the spinner, but you can use it in other ways. 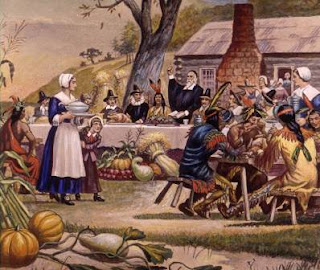 The concept of the story part I got from A Children's Songbook Companion book, so it is not my original idea; however, I did rewrite it for my taste and revised how to present it using my spinner and the songs we knew. You can still present the story using the turkey cut out from the previous post here or if you don't want to use a turkey visual to present it, you could use it in a book format as originally mentioned in the companion book. If I had done this in a book format, I would have used a thin binder with page protectors with the storyline pages inserted and the facing page for each left blank to insert the pictures after they had answered and picked the correct picture.  I just noticed a great blog here that posted this same book idea.  It is so wonderful the many great ideas and variations floating around out there.  My file for the First Thanksgiving Story I wrote is attached below.

So here is how I presented it with the spinner. I've also inserted comments for the book version as well.

There you go. Have a wonderful Thanksgiving!