SAMUEL TELLS OF THE BABY JESUS 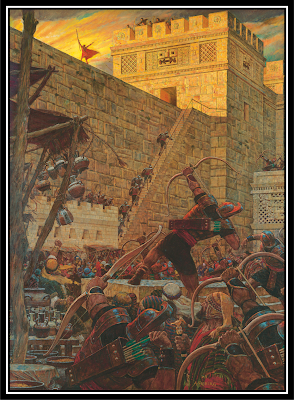 "Samuel Tells of the Baby Jesus" is a story song that is fairly easy for the children to pick up on. I also love the upbeat tempo change from the verse to the chorus that helps demonstrate the joyous announcement of the Lord's birth. Definitely point that out as you are teaching by asking the children what they notice about how the song changes and how does it help express the message in the song.
This is a fun one to have a child dress in a simple costume as Samuel and help demonstrate what happens in the song.

Here is how I presented the song last year. Depending on how quickly your children pick up on the song, you can teach in once session or split it up into two weeks.
Here are some ASL and actions for the song you can use to help when reviewing the song. Use as little or as many as you feel is comfortable for your Primary.

CHORUS
VERSE 2
Below is a flip chart for the song. The last page is a picture of Samuel on the wall if you need a picture to show.