It's the most wonderful time of the year!!!
I love hearing Andy Williams sing this song. It brings back those
childhood memories
of knowing that the Christmas season is upon us.
I love the lights, the decorations, the joy of giving,
the music, and most importantly,
the celebration of the birth and life of
Jesus Christ, our Savior.

"Picture a Christmas"  is a beautiful song that helps instill in our minds that first Christmas. When I introduced this song to my Primary a couple of years ago, for the "Attention Getter" I had the pianist softly play the song in the background while I had the children close their eyes and asked them to picture what Christmas is to them. After the pianist played the song through once, I had the children open their eyes and let some of them share what they pictured Christmas to be for them. I then told them I wanted them to close their eyes again and listen to this song and picture in their minds the things they hear in the song and to remember them because I was going to ask them what those things were. I then sang the song to them. This gave them a chance to hear the music a couple of times and the words to the song at least once to this point. 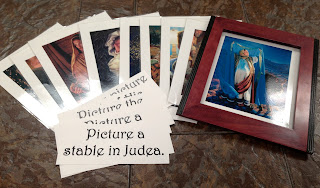 When the song was through, I had them open their eyes and asked them what were some of the things they heard and pictured? As they answered, I placed pictures on the board that represented those parts of the songs. Of course, they didn't get them all on the first try. I would asked them to listen again as I sang a phrase to see if we got them all and in the right order. I would receive their answers again. When we got that phrase done, I would have them sing it with me. I would proceed with the next phrase the same way and so on. I also put up the words under the pictures as we went, this helps the teachers and some kids learn better by reading the words. Occasionally, I would throw in a directed listening question. 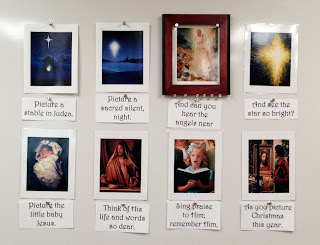 Of course, you can't sing this song without having something to do with a "picture" theme.  So after singing the first verse, I had a child come up and hold  a picture frame over each picture for each part of the song as we sang. I just continued until we had learned the whole song. To make things a little more challenging for the SR kids, after singing it a couple of times, I would switch a few pictures around and the child had to still make sure they placed the frame over the correct picture as we sang. The kids had fun learning the song and we still kept a fairly reverent feel during the whole learning experience.

So now you have covered some different ways kids learn by using a variety of methods: by hearing, by seeing, by reading and by repetition without making it boring.

I also shared my quick testimony that although there are so many wonderful and delightful ways to picture Christmas, we need to remember and celebrate that the real picture of Christmas is the birth of our Savior, Jesus and we also need to think of his life and words.

For a review time I cut out little frames from card stock with my Cricut for each child to use to follow along with me as I moved the big frame as we sang. They would just hold it up to one of their eyes to look through.

Another year I brought in a nativity set and had children help to set up the nativity as we sang each part. For the star, I used an old Christmas tree lighted star topper that I had and stuck it on top of a long stick and plugged it in so it would light up and let the children take turns holding it. You could just hang a star ornament on a string tied to a stick and have the children take turns holding the star over the nativity while you sing. I also brought in a small lamp and a light for the pianist (since our room gets pitch black with the lights out) and had a child turn off the light when we came to the part "Picture a sacred, silent night" and we finished singing it with the lights out.

If you don't have a nativity set to use, you could use the Christmas set #8 from the Primary Visual Aids Cutouts packet. You could also use the night cutout from the Nature set #3 and cut out a star from white paper. Just draw a simple frame on the chalkboard with a stable inside and then add the figures as you review the song.

Have fun this month as you sing the beautiful Christmas songs. I hope to get more Christmas flip charts I've made and ideas I've done posted soon.