There I go again with those alliterations.  Don't you just  loooooove how it rolls off the tongue???  Spec—tacular Singing Sunglasses!  Yeah, I know, it is just another fun, fancy, smancy name I made up for a well known Primary singing game.  Some of the names I've heard it go by are: Headband Hero, Word Nerd, and Hat Game.  It's been a couple of years since I've done this one, so I guess it is time to bring it back, except this time with a little bit of a President Hinkley "BE" STING to give it a little oomph using his "6 Be's", and maybe a couple of extra "Be" songs for good measure (probably won't get through them all, but at least there is a good choice to pick from.) 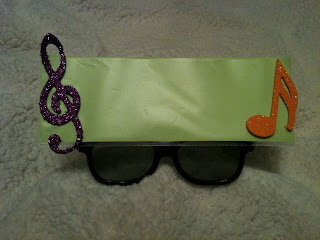 The basics of the game is that a Key word written on a word strip that has been chosen from the song or phrase you are working on is placed on a hat, in a sweatband, on glasses or smacked-dabbed with tape on a child's forehead.  Everyone can see the word except the child who is standing there in front of everyone else with the word prominantly displayed on his/her head or forehead.  The Primary sings the song or phrase but omits singing the word or la-la's over the word, or what works better for JR is to sing the word louder than the rest of the song. In JR Primary, since most of the kids can't read, have the child leave the room for a moment while you tell the rest of the children what the word is. The guessing child needs to listen carefully while singing the song in their head while everyone sings out load so he/she can figure out what the secret word is and then gives the answer at the end of the song or phrase you are singing.  This is a great way to review a song over-and-over-and-over-and-over-and-over. . . again.

I will be using this as a choose and review singing time and this is how I will be doing it. 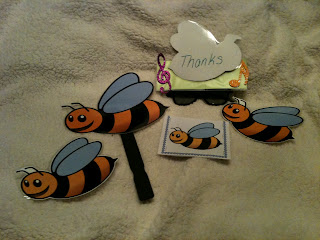 This is the Bee file for the following two items:

Some of these items are optional depending on how much you want to do. Adjust for what works for you. 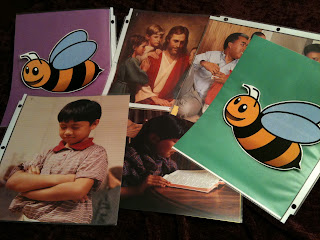 HOW I MADE THESE SPEC—TACULAR SINGING SUNGLASSES
(Get it? Spec—tacular)

Shortly after I was called as Primary Music Leader I went to a 3D movie and while waiting for the movie to start, I was staring blankly at my 3D glasses when suddenly, the music leader brain cells in me started churning and churning for ways to use this awesome piece of junk potential singing treasure in singing time. My Spec—tacular Singing Sunglasses was born!  To make these, I cut off 3" from the bottom of a page protector. Used glue dots to adhere it to the top rim of the glasses.  Cut a colored piece of card stock to fit inside of it to help keep the page protector from flopping over and to give it some fun color.  The key word strip slides inside the sheet protector or you can tape it on the front.  I then cut out a treble clef and a music note or rather a sixteenth note with some scrap fun foam to give it a singing time awesome look.  And voilà! The most Super Spec—tacular Singing Sunglasses ever!  For the JR, try using the child size 3D glasses for a better fit on their small heads.  If you want something easier, there are fabulous and stylish glasses you can pick up from the dollar store nearest you and use as is or with a piece of tape wrapped around the center for a wordy-nerdy look or just use some ol' glamour style pair of glasses you have hanging around the house.

Email ThisBlogThis!Share to TwitterShare to FacebookShare to Pinterest
Labels: Choose and Review, Musical Aids, Song Review, Stand for the Right