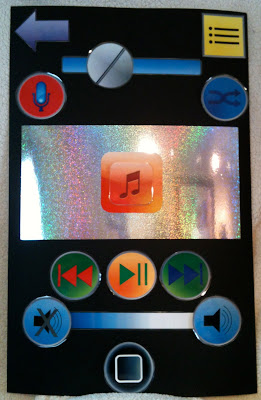 I have soooooooo been wanting to do this iPod singing time for quite some time.  I actually had this almost all put together last September with the intent to use it for a program review activity, but then our program date got moved up a couple of weeks, so unfortunately, I had to drop it from my plans. But NOW, I think we have a few songs under our belt, that I can finally do it to review program songs and other songs we have been learning lately.
So, what is this iPod Singing I'm talking about???? Well, you may already know it by the name of "Remote Control Singing". This is a fun way to review a song over-and-over again or you can use it for a choose and review activity.

When I happened upon the idea of a remote control singing time, you know, I couldn't quite wrap my head around what a t.v. remote control had to do with singing time, so I couldn't bring myself to doing it, but I liked the concept, so, think...think...think...I did. Hmmm, what do I listen and sing to every day getting ready for work, driving to work, at work in my office, walking around my workplace (oh yes, ask any of my employees and they will tell you I am singing all over the place—the one good thing about being the boss is, they wouldn't dare complain about my singing—at least to my face, LOL), coming home from work, and every-other-moment I can squeeze in to learn those primary songs????
Voilà! My iPod on my iPhone!  So, here is my version for an iPod for singing time.

I really wanted this visual to be interactive instead of just pretending to push a button. Just thought I'd let you know that up front so as you are reading through this post, you might understand the reasoning behind my madness for making it the way I did.  Since I've already created the buttons, it is pretty easy to put together. The files I made are listed at the end of this post.

HOW TO MAKE THE iPOD

OTHER "HOW TO MAKE" OPTIONS
HOW TO USE
I first showed the kids the iPod on my iPhone asking them if they could see the buttons because we were going to use it today for singing time. Of course, they couldn't and then I said something along the lines of, "What if I SUPER-SIZED  it?  Would they think that would help?" And then I whipped out the super-sized iPod. I'll admit, the kids eyes bulged out a bit when they saw the super-sized iPod. 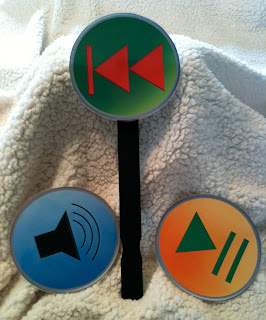 MY VERSION FOR THE FUN iPOD WAYS TO SING

THE RULE OF 5
When you do an activity that allows a child to be in control of switching back-and-forth between actions or activity, such as loud vs softer, does that child love to switch back-and-forth between the actions quickly and often? HA!!! I knew I wasn't the only one with such fun-loving and rambunctious children!  Well, here is a helpful solution to that. I call it "The Rule of 5" (sometimes 3).  I remind the children that they can only switch in the song up to 5 times and they can't switch any faster than 5 seconds (one-one thousand, two-one thousand . . . .) If the song is a short song, I may change it to the rule of 3 or if it is longer, I may give them an extra 1 or 2.  I just tell them what it will be for that song; 3, 4, 5. . . .

I have to tell you that for the volume one I had the song "The Wiseman and the Foolish Man" and the child who did this would bring the volume down on "the rains came down" and raise the volume on "the floods came up".  It actually sounded pretty cool and the kids really enjoyed that.  Just thought I'd share.

As I said before, this is a great, new twist for all those fun ways to sing while giving variety to singing time as well as getting in some repetition on the same song or reviewing several songs.