Easter is coming quickly upon us. What a wonderful time to sing all the joyous songs about our Beautiful Savior and all that he has done for us. Below I've attached various files you can choose from to use for the song "Beautiful Savior". 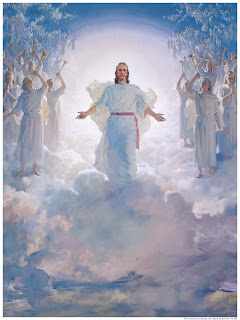 Last year when I introduced this song I brought a big, oval, wrought iron mirror as an attention getter (It was not too big or heavy, so I was able to hold it—it was about poster size.) I faced the mirror to the children so that they could see themselves in it and mentioned all the beautiful children that can be seen in the mirror. Then I asked them if they remembered the fairy tale Snow White and how the queen possessed a magical mirror that she would ask, "Mirror, mirror upon the wall, who is the fairest fair of all?"  I then explained that the word "fair" or fairer" is another way to say "beautiful".

I asked them to listen for three things that are fair as I sang a beautiful song to them. [sunshine, moonlight & stars] After they answered, I taped the round visuals for those things (files are listed below) on the mirror frame starting on the lower, left side. Oh, by the way, I had placed the mirror on an easel. I wasn't about to hold that mirror the whole time.  I had really wanted to have a mirror that was a little smaller and lighter that I could have hung on the board with magnets or one of those 3M Command hooks so I could place the pictures for the song around the mirror on the board, but I didn't have a smaller, pretty one, so I went with the bigger one I had.  If you don't have a mirror you could make one out of cardboard and aluminum foil. Anyway, I continued to place the round song pictures around the mirror in order as they answered the directed listening questions.

The second directed listening question I asked them to listen for as I sang was
who shines brighter and purer than the sun, moon and stars? [Jesus] I then placed the picture of Jesus in the center of the mirror along with the round pictures for that part of the song.

The third directed listening question I ask them to listen for was what does Jesus bring to all the world? [His love] Again I added the visual for that part of the song. The first verse visuals were around about 1/3 of the frame.

Of course, I had the children sing with me after I sung each phrase of the song a time or two during the Q&A singing.

I taught a verse of the song each week adding the pictures around the mirror/picture of Jesus.  I continued using directed listening questions related to each verse as well as I continued with teaching the sign language along with other singing activities.

Here are some other ideas that I have used in teaching or reviewing this song that the children have enjoyed doing:
I have to admit that there were times the children sang this so beautifully, especially the last verse that they could just feel the spirit as much as I did.  I'm a person that does not like to cry in front of others, but at times, they did bring tears to my eyes with their strong, little spirits.  We did this for an extra song in the program last year and it was mesmerizing watching the children sign this as they sang.  Many were so graceful as they sang with their hands as well as their voice.

Here are some pictures of the small posters. The round, key word visuals are similar. Sorry, not the best lighting taking these pictures in the middle of the night, but you get the idea. 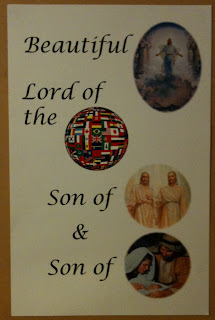 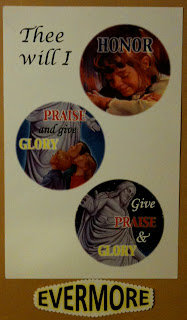