FLIP CARD OR THE ENVELOPE GAME? 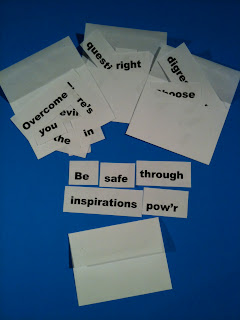 Well, the Envelope Game has been around for some time in the Primary Singing World and is mainly for the SR Primary because it involves reading.  It is a game whereby you make wordstrips for each word in the song grouping the words by phrases and then placing each phrase's group of words in it’s own envelope.  If you have a larger primary, make more sets of wordstrips and envelopes as needed.  The game is played by dividing the children into groups of around 3-8 children per group depending on the average of how many words are in the phrase and/or how difficult the words in the song are, and giving each group one of the envelopes with a phrase of the song.  You then sing the song to them two or three times or play a recording of the song while the children listen and put the words together in the correct order for their phrase (singing to the children is usually better for them to hear the words but sometimes it’s nice to change it up a bit and play a recorded version.)  Once they have the wordstrips in order, sing the song with the children a time or two having each group sing their phrase.  Afterwards, have them place the wordstrips back into its envelope making sure the words are mixed up and then pass it to another group.  Repeat the process letting each group have a turn at putting the wordstrips in order for each phrase then singing that phrase.  At the end, everyone sings the whole song together.
Another variation is to have just the key words to the song in each envelope so that the children are all putting the same key words of the song together.  This is a great teaching method for learning a new song.  You get lots of repetition, the children have to use their little noggins to think and they are actively participating. 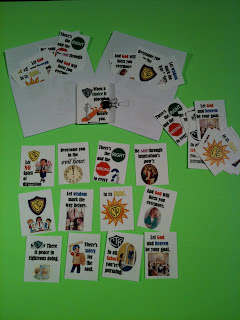 Now here’s my little twist to the Envelope Game that I call the FLIP CARD GAME.  I cut up mini versions of the flip chart for the verse or verses I want to teach giving each group or class a set.  I actually won't be putting the flip cards in an envelope.  I’m just going to clip each group’s set together with a binder clip.  I will have the teacher pass out 1 or 2 cards to each of the children in that group.  I’ll probably do 6 in a group so that each child can have at least 2 cards, maybe less for the oldest classes.  As I sing the song, they need to flip down their card in the correct order.  Oh yeah, make sure you clarify what "flip your card down" means, otherwise, some of the kiddos will interpret it differently than you had intended.  Yep, I've got me some lots of boys like that.  So as you can see, it is not a FLIP CHART but a FLIP CARD.  Get it??????? ;-)  Yeah, I know, a little dry sense of humor going there.
Since we have the melody, first verse and chorus down for the SR primary, I plan to work through both the 2nd and 3rd verses this Sunday, so each envelope will have a set of both the 2nd and 3rd verse as well as one set of the chorus.   After we WARM UP with the 1st verse and chorus, I’ll start the game by singing only the 2nd verse and chorus.  They will have to figure out which cards will be played first by each child laying their card down in front of them in the correct order.  Depending on the age of your group and how well they are getting the cards in the correct order, you may want to just sing the 2nd verse a couple of times and then continue on into the chorus after the 2nd or 3rd time through the song.  Some children may like to play this on the floor and others may want to stay in their seats.  I usually bring these chipboard sheets that I once scrounged up from work that are about the size of a piece of paper for those who want to do it sitting down. That helps to give them a flat surface to work on.  After they have the song in order, we will sing the song together.  Then I will have each team select one or two of their cards to remove and give back to the teacher after each time we sing to motivate them into memorizing the song.  I still plan on referencing the melody map and having them help to figure out where the different pictures go on the melody map.  That will help them to not just look down at their cards the whole time but to focus on the melody going up and down as they sing.  Gotta keep them thinkin' so they don't get bored.  Oh yeah, and don't forget about the Faith in God award challenge from the last post!  That will be my Attention Getter at the start of singing time.
I’ve attached the Flip Card files below for each verse and chorus that you can pick from depending on what you would like to work on.  Each file has a set of 4, so if you only plan on having four groups, you only need to print and cut one sheet per verse and/or chorus you will be teaching.  Easy-peasy—not much paper to print, just a little cutting up.
Choose the Right verse 1
Choose the Right verse 2
Choose the Right verse 3
Choose the Right chorus