I AM A CHILD OF GOD: FLIP CHART 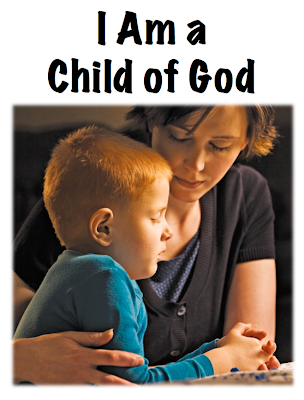 Well, it is the start of a New Primary Year and time to get going on the first program song of the year. If you are like me, or rather how I was before I got "booted" out of my singing job, {sniffle—sniffle} I liked to just have some singing fun the first week and spend time getting to know the new, little  SUNBEAMS by singing all their favorite and familiar songs they've sung in nursery and let them be the stars of Singing Time by letting them be your helpers. Besides, it always seems to be chaotic the first week as the children and teachers try and figure out where they are supposed to be, so some fun, no pressure singing is just the ticket the first week.

However, if you are ready to jump right in and get going on this month's song, here is a flip chart for "I Am a Child of God" for all four verses.  I have also included the descant part in case you want to venture a stab at it.  Since your Primary is probably very familiar with the chorus, I only added it once in the flip chart. If you want to have the chorus after each verse, just select those pages and print how many copies you want.

I don't have time right now to post ideas on how to present the song, but you probably already have thought of or found some to do. If I have time later, I will post some ideas that I brainstormed when I was making my plans last fall before my demise as Primary Music Leader. ;-)


SEE!
I told you I would be back!
In fact, stay tuned because sometime in the near future
I plan on doing another give-away!
YEAH!!!

Email ThisBlogThis!Share to TwitterShare to FacebookShare to Pinterest
Labels: Flip Charts + Viz, I Am a Child of God