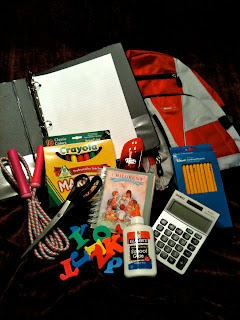 
It's that time of year when children's excitement explode with anticipation of school and in wonderment of who will be their teacher, what classes they will have, which friends will be in their classes and of course, the joy of getting new school clothes and school supplies. I don't know why this is, but I just love school supplies. Yep, there is nothing like having a fresh box of


crayons
with all their little pointy ends just waiting to touch a fresh piece of paper to see what will be created.

Here is an easy "Back-to-School" idea I did a couple of years ago to help review some of the program songs that needed some work or maybe you just have a song or two you need to work on over-and-over again. This can work for that too; just take turns repeat singing the song you want to work on doing the singing activity according to the school item chosen each turn then moving on to another song after you feel they have sung that song enough times and are ready to move on. If you choose to do all the program songs instead of a select few, this activity will probably last you a couple of weeks. You probably have several, if not all, of these school items around the house.

HOW
SCHOOL SUPPLIES AND ACTIVITIES (key sheet downloadable below)

Calculator: Choose a word in a song that is used several times and have the children count how many times that word is sung in the song. Have the JR hold their hand(s) up while they sing and count on their fingers. For SR, at the end of the song, have them hold up the number on their fingers when you ring the bell to see how many are right.

Crayons or Markers (set of 8-10 colors): Hold half the colors in one hand and the other half in the other hand. When one hand with the crayons/markers is held up, the children wearing those colors sing while the other children hum, la-la or oooooo and vice-versa with the other handful of colors. Take turns switching between colors. You could just select a few colors for each hand if you prefer.


Eraser(s): "Erase" one or two words from the song by not singing them. Preselect the word(s) in the song you want to omit from singing. If there are 2-3 words to select from, then you could write each of the words on a different eraser and have the child pick one to determine which word to omit. This is a good one for a sign language song; although they would omit singing the word, they would continue doing the sign language.

Glue: Have them "glue" themselves in some pose that they have to hold through the song or for a more reverent song, have them glue their hands together or arms in a folded position.

Magnetic Letters: Have a child pick a letter from the little bag or box you have the magnetic letters in and while singing, they must omit singing each word that begins with the letter that was picked. In preparation for this one, look ahead at the song you have chosen for this activity and select several magnetic letters to put in your container that have several words using those letters in the song. This would mainly be for SR's since this would be a little difficult for the JRs.

Notebook of Paper: Pass out a piece of paper to each child from the notebook and have the children snap the paper to certain words, for example for the song "Choose the Right" you could have them snap the paper whenever they sing the words "choose the right", or they could play their piece of paper by holding it in one hand and hitting it with the fingers from the other hand to the beat of the song while they sing.

Notepad and Pen or Chalk or Small Dry Erase Board and Marker: Give the notepad and pen, piece of chalk or dry erase board and marker to a child. While singing, randomly stop the song and the child must write what the next word is on the notepad, chalkboard or dry erase board. Pick up singing where you left off and repeat stopping another time or two during the song. Have the child write down each word after each stop and check it after you finish the song or you could have a different child come up each time.

Pencils: Have a pencil for each child to pitch lead or conduct with as you sing. You could let the children keep the pencils afterwards.

Pencil Sharpener: Sharpen the words in the song by enunciating each word as you sing while slightly exaggerating the mouth.

Ruler: Who rules? Boys or Girls? Have a boy and a girl come up front. When you point to the girl with the ruler, the girls sing. When you point to the boy, of course, the boys sing. The girl and boy who represent the teams must of course also be singing to help represent their group. Another option is to have the girls and the boys each take turns singing the song separately to see who "rules". Or another option is that you could measure the volume by moving the ruler up and down: raising the ruler to increase the volume (crescendo), lowering the ruler to reduce the volume (decrescendo) or moving it to mid point for normal volume.

Scissors: Have everyone stand still while singing and as they sing you walk around "cutting out" the non-singers and wigglers by tapping them on the shoulder or head to sit down, but they need to keep singing. For SR I like to make it more challenging and to help prevent the goof-offy kids from wiggling on purpose so they can sit down by telling them that any that get "cut out" get the privilege to come up front and be a mini choir and re-sing the song.

Toy: Jump Rope, Ball or Other Small Toy = Recess Time: You will need a bell for this. When the bell rings, the children take a "recess" from singing the words and then when it rings again, they pick up singing the song where the music is. (The music continues playing when they are on "recess", so they have to keep singing it in their heads so they know which word they are on when they start singing again when "recess" is over and the bell rings.)

Remember, if you have the children control these school items for the singing activities instead of you controlling them, give them the rule of 6, 5 or 3 (for short songs). They can't switch more than that number of times in the song and they have to count to at least that number before they can switch again. For JR I don't have to use this rule, but I always do with my SR kids because there are some of them that just think it is so funny to keep switching back-and-forth quickly as many times as possible. (Well, okay, it is funny, but a bit difficult to sing.) I gotta keep ahead of those smartie-pants.

OTHER IDEAS TO ADD A LITTLE MORE "SCHOOLING" EXCITEMENT IF YOU FEEL LIKE IT
Well, I hope that gives you some fun Back-to-School reviewing ideas.