With March's theme being about prophets, I'm sure many of you have been planning on fitting in all those fun songs about prophets—if you haven't already begun. If you don't have any visual aids, here are some I made for the "Latter-day Prophets" song.  All files are listed at the bottom of this blog. 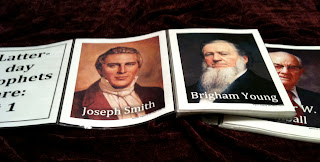 It seems to AMAZE the children to visually see how many latter-day prophets there have been when they see each one unfold as the song is sung via an accordion version using the pictures of each of the latter-day prophets with their name.  To make the accordion flip chart, I just took some page protectors and with a knife and a straight-edge cut off the side with the 3-holes so I had just the page pocket. Then using clear packing tape, I butted one page protector up against another and taped them together, repeating the process until I had 18 page protectors in a row all taped together.  Make sure you tape them all on the same side.  Insert the pictures with the taped side being the back, fold accordion style and away you go.  I used page protectors because I thought that maybe sometime I may do another flip chart or visual I would like to display accordion style so, this way all I would have to do is to switch out the pictures. You could just laminate the pictures and then tape them together accordion style.  Have 3-4 children stand in a row up front all spread out to help hold the accordion flip chart up as you sing and unfold the visual revealing each prophet. There is just something more spectacular about seeing one long row of prophets versus just having pictures posted on a board.  You could purchase the pictures from the Distribution Center or their online store, but I found it a little cheaper, at least for me, to print them and I wanted the names on the pictures.

If you prefer a smaller version, I've included a file with two pictures to a page.  Cut out each picture of the prophet to be the same size leaving a white border around the picture. Mine are 5 1/2" x 7 1/2".  You can mount them on sticks and/or add magnets to the back. Here are a few ways I used the smaller version: 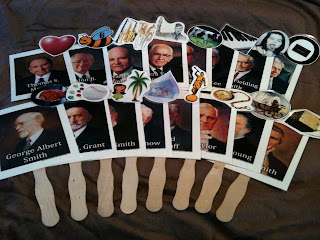 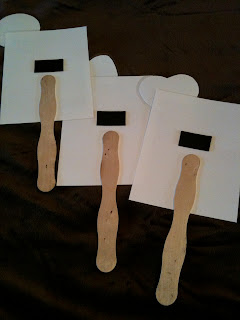 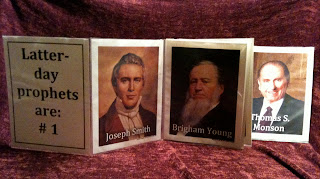 As you are learning to sing the song, it would be fun to learn a little bit about each prophet.  I've included a fun fact sheet about the latter-day prophets that I've put together.  Actually, it is more than one sheet, but "fun fact sheets"  just didn't sound as spiffy.  I got most of the information off of the Church's web site.  There are also quotes from the prophets in blue as well as a coordinating song to sing, in red, if you want to do a "Choose and Review" activity sometime.  Along with the fun fact sheet, there is also a file with a fun fact clip art for each prophet and a key sheet file for the actions.  I've also included the link to the current version of the song. The ending is different than what is in the songbook, so if you want the music to coordinate with what you are singing, you will need a copy for you and your pianist.  Here are some ideas on using these files.
The kiddos love to learn and sing this song.  They especially love hearing a little bit about the prophets life.  It helps to bring the prophets alive for the children.