Usually at the end of the month I like to review program songs in a fun way.  Since this is the first month of the year and we only have one program song under our belt, I thought we would review some other songs along with “As a Child of God” (we may be a bit rusty on this one since we missed a week with Stake Conference being last Sunday) as well as a couple of wiggle songs for the JR Primary.  So this week is a Choose & Review Week. 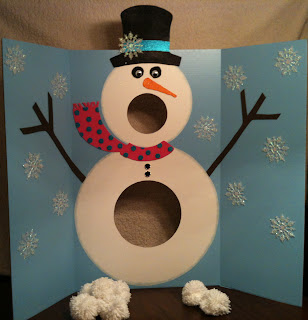 We have had a dry winter here in Utah.  We really haven’t had any snow.  Not that I miss it really, but it would have been nice to have some for Christmas and now and again to help clean out the air.  Being in the Wasatch Front Valley area, we can get a lot of inversions trapping in all those lovely pollutants.
Oooo, Bad, Yucky air.
The ski resorts have been pretty busy making their own snow this season since Mother Nature hasn’t cooperated.  But FINALLY, we got snow this week.  Ahhh, we can breath a little better now.  So in celebration of the snow, here is the
Mr. Singing Snowman  I made.  He has a bit of a frightened look on his face. Maybe it is because of the pom-pom snowballs that will be flying at him come Sunday.  OH MY!

I don’t have a pattern, but I can give you general dimensions and instructions in case you feel you need a little Singing Snow Fun.  The snowman poster was pretty easy to make.

Here are some rough dimensions to help give you an idea. 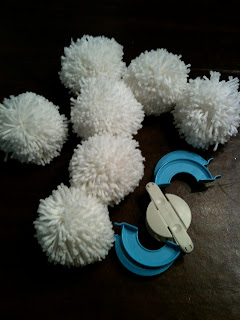 I made pom-pom snowballs out of white yarn.  These are easy to make.  I just made me several one night watching TV.  You only probably need about 2-4 snowballs.  I just got carried away having fun making them.  They are about 3 3/8” in diameter.  I almost wished I had made them 4” but that might have been a little big for those tiny hands.  I used a pom-pom maker tool by Clover (the gadget in the picture) but you can easily make them with a piece of cardboard.  In fact, in the August 2011 Friend magazine, there are instructions on making the “Warm Fuzzies” on page 3.  Just make them bigger.  You can also search the Internet on how to make pom-poms.  There are actually quite a few methods floating around, even one using a CD and popsicle sticks.  I bet I’ve got you wondering on that one!  If you don’t want to do pom-poms, you could use wadded up paper shaped into a ball or Styrofoam balls for the snowballs. 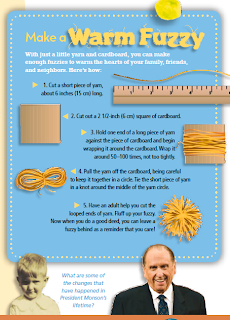 The object of the game is to have the children take turns throwing the snowballs at the snowman trying to make it through one of the holes.  I'll probably just give them two snowballs per turn to throw.  Take some masking tape to mark where the throw line is (make it closer for JR). 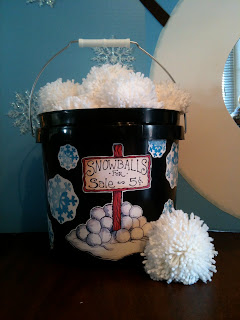 I found this cute little 2 gallon bucket at work that was going to be thrown out and my Primary Singing Brain just started churning to figure out how to use it for singing time.  I’m always thinking of how I can use those odds and ends that I find around; it’s one of those side effects you get from being the Primary Music Leader!  What can I say???  Anyway, a thought came to me about how fun it would be to use it to carry my snowballs in and for the kids to pick up the thrown snowballs from the ground and put them back in it.  I think they had just as much fun picking up the balls and putting them back into the bucket as they did with the snowman.  I just printed and cut out some of these snowflakes and the “For Sale” sign and adhered them to the bucket.  I probably should have put something like “Snowballs for Sale for a Song” instead.  Oh, there really isn’t that many snowballs in the bucket as portrayed in the picture.  I just put some stuff inside the bucket so I could place the snowballs on top for the picture.

What other ideas can you think of for using this for singing time?


I hope you have Snow Much Fun with this!